I bought some Underground Seas so I could play legacy. (Playing Legacy won't probably happen due to my situation now though). Two of the cards are heavily played and I was wondering if I could help the cards in some way. Altering a card usually works.

The colors on Underground Sea are too light for my taste though. Flooded Strand has similar kind of colors and I remember that it was a pain. I decided to add contrast and some more color to it...but doing this on Underground Sea? Not sure.

Anyway here's an attempt of how it could possibly look like. My flat mate said that it might be good to paint Jace or Dark Confidant there as well. So I might add that later. (but first I need to prepare a photoshop mockup to see how it would look like in reality and use that as reference.) 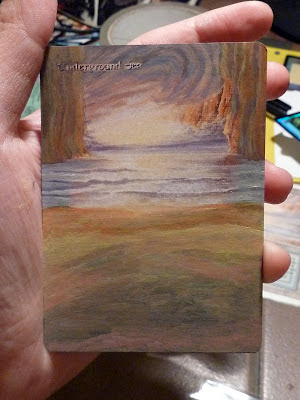 Posted by STsung at 9:20 AM No comments: