My altering 'history' - look back

Quite a long time ago, Squop-kun mentioned that I could try altering a Magic: The Gathering card. He supported me for a long time and allowed me to start and learn how to do alters the way it should be done.

I never really tried painting anything and doing alters seemed as a challenge. Not to mention that I wasn't really sure how to even mix colors. I later found out that I actually have good knowledge base for this coming from mixing colors for website creation. But still mixing numbers and paint is different.

My first ever try was on Gustrider Exuberant. I just picked a random card (I actually used this as a proxy) and tried to 'paint' on it. I used a bit of water, some acrylic paint and a brush (obviously). I wasn't really sure what to do so I tried to do some brush strokes and see what would come out of it. 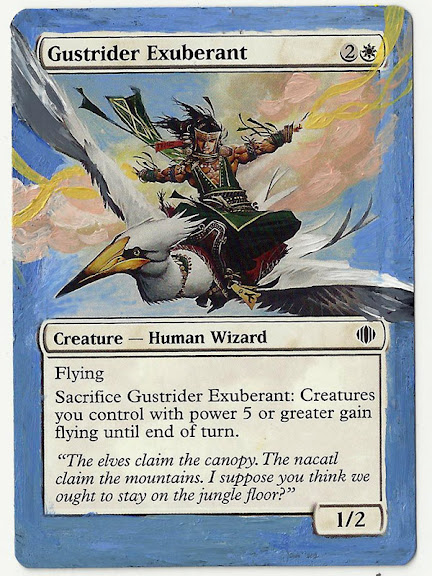 You can clearly see that I encountered several problems. First what I realized is the fact that I would probably need to do something with the borders or other parts of the card I want to paint on. Because if left as it is you can clearly see what is underneath. And the second obvious problem was color matching.
Looking at it now, I can tell that I had many more problems than just these two. But I wasn't really sure how to solve such problems. You can see that I have a lot of paint there. It is far from being a clean alter. That is because I did not do more layers of the paint. (I actually did, but it wasn't well done)
One of the other problems I wasn't aware how to solve was the paint protruding where it shouldn't.

But at this point, after my first alter I was concentrating more on how make the paint behave the way I want. I also had some real issues with figuring out how to mix a red color for Executioner's Capsule. This was my fourth alter (I think) and it looked way better. Matching all these colors was a pure hell. At least that's what I thought at that time. Nothing prepared me for the worst colors (for me) ever that can be found on Sorin Markov. 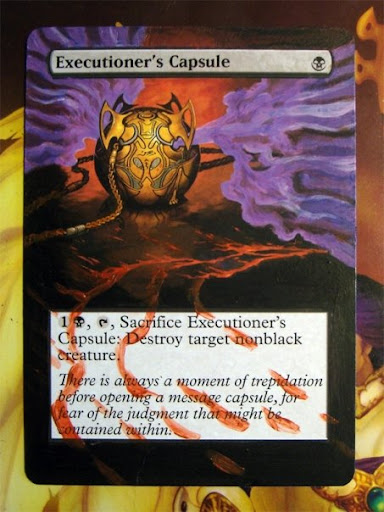 After feeling a bit more confidant with altering I wanted to try my own alter. For that I chose Fallen Angel. 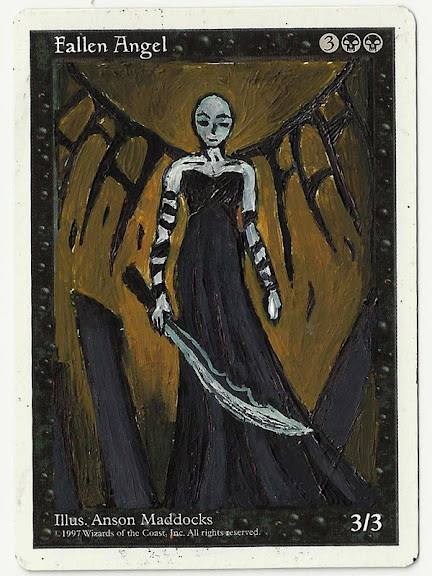 After finishing this one, it seemed that I should start right from the beginning. The paint was thick once again and there were parts I just couldn't figure out how to paint. But still it was an achievement. I had problems with the cards surface. The paint did not want to stay on the card and I encountered this problem with some older cards not in good condition.

Some time later I started doing commissions. Some of my borderless alters got good feedback and people actually bought them. While doing more and more alters I found out that trying to get certain hues of brown or some other color is not that easy as it seems. But the colors came out ok usually.

At this point I also started to use a toothpick to get rid of some paint going rogue and I started to master the technique of erasing the original card print color. This also meant that I bought some artistic tape and started using it to protect the parts of the card I did not want to erase. (see picture below). When all the job is done, you need to seal the paint. For that I use acrylic spray and it works fine, but it took me a long time to find one that works well.

Now I see that altering cards is becoming an art. No seriously, the alters some people do like poxy, klug, demonium, masamune, sandreline (and many others) are not only awesome but these alters are taking the whole altering to a new level. If you never heard of these people you better check them out. Good starting point might be Star City Games and the monthly posts by Jeremy about new alters. Or you can browse the alters at mtgsalvation.com.

I try to make my alters clean and well done. With each alter I try to improve and one day I might be able to do my own personalized alters that people would like as well. I try from time to time, but in the end I see that this kind of alters need much more work and improvement. So I try to start with small alterations...

One of popular themes is 'anime girl'. People like them for some reason. They are usually half naked in a sexy pose. I tried some as well. And 'tried' is the word where it ended. Not so long time ago I found out that many people when doing such alters copy a image using carbon transfer. This makes it way easier I can imagine. I never tried this yet...

As for me and the anime girls. I would really need something with what I could be much more precise than a brush. I tried different brushes, different fluidity of the paint and still I can't get the details done well. But I'm improving and one day I might find a way how to become better at doing this.

Thanks for reading. If you are interested in seeing my other alters you can check my picasa album located => here. I'm far from being good at doing alters, but I'm slowly getting there. And if you want to check some masterpieces, check star city games.
Posted by STsung at 5:51 AM No comments: 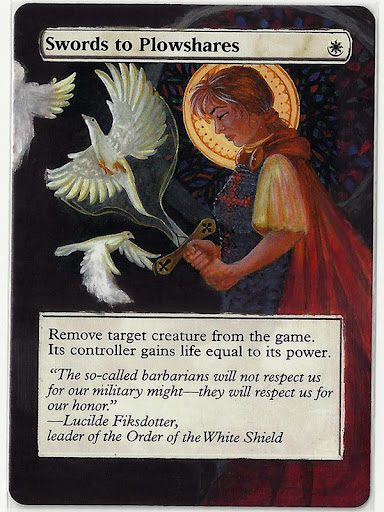 Posted by STsung at 3:32 AM No comments: